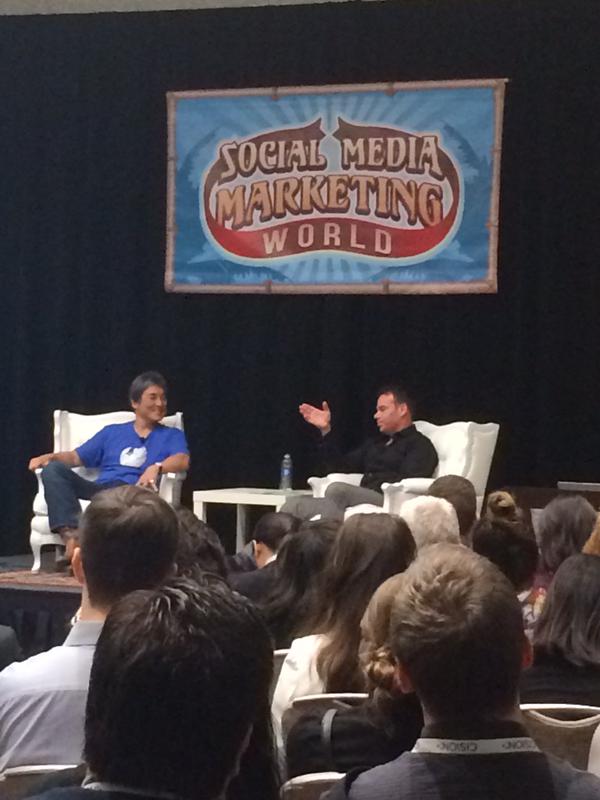 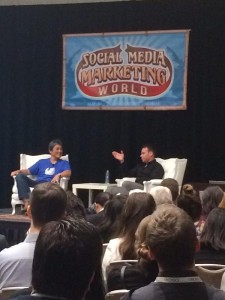 Hey Unemployables! Welcome to episode 265. I’m excited to bring to you part 1 of 6 shows from my sessions at Social Media Marketing World 2015 (SMMW). This was a great episode with the legend himself, Mr. Guy Kawasaki, in front of a live audience, and it was a blast.

We had a great chat about cars, branding, flying helicopters under the bridge, and having an opinion! Check it out on the 265th episode of The Solopreneur Hour.

More About Guy Kawasaki and Canva

If you’ve lived in a cave for the last 20 years you may not know today’s guest, Guy Kawasaki. But if you’re an active social media user, a Canva user or an Apple aficionado you definitely recognize his name! Guy rose to fame as a Chief Evangelist for Apple back in the mid 90s. That was his second stint with Apple; he was an evangelist for their software from 1983 to 1987. He left in 87, built a few software companies of his own and returned in 1995.

About that time there was nothing but bad news about Apple, but it was his job to share the good things they were doing. And that’s what he did. He put out daily content to their listserv of around 44,000 people. If you don’t know what listservs were they were the predecessors to things like MailChimp and Constant Contact of today.

His work helped sustain Apple through some very dark times. In 1995 Michael Dell of Dell Computers was telling Steve Jobs to take Apple’s cash reserves, pay off the shareholders and close the company! Obviously Steve didn’t listen to him and kept the company moving forward.

Guy shares that particular story on this episode as well as his role as chief evangelist for Canva today, why he’s on the board of a humane society and also gives his mental model for social media based on NPR.

On This Show You’ll Also Discover:

One of the most interesting and solopreneur-related topics we discuss is how he uses social media. Guy says he’s never consciously chosen to shift platforms, it’s more like he has embraced social media as a whole. He genuinely loves all things social media and choses to use the platforms as just that: platforms. He doesn’t do social media to be social!

He explains it by comparing his use to how NPR has built their organization. NPR provides daily content that is so valuable, so informative and relevant. We the general public enjoy it and we tune in throughout the year to hear what NPR is providing. And because they’ve provided so much to us throughout the year we feel an obligation to contribute when they hold their pledge drives.

Guy says that’s the model that he and his team use for social media. Their intention is to inform you, provide analysis so you understand the impact while also providing entertainment and assistance. His use of social media is to constantly create and curate either information, assistance, analysis or entertainment. And occasionally he will offer his books or tools (aka his own “pledge drive”).

The hope is that by providing such great content consistently with occasional offers thrown in you the reader not only feel it’s ok to for him to promote his books or tools but that you’ll want to reciprocate and buy from him during his “pledge drive”.

In addition to that amazing nugget Guy gives a specific example of how he would do this if he were running the social media for Virgin America, which is also a fascinating pearl of wisdom. Listen in to get the goods on that and much more on episode 265 of The Solopreneur Hour. See you next time!

QUESTIONS OF THE DAY: What can you do differently on social media after hearing Guy’s model? Let us know in the comments below!

Selected Links From This Episode:
Guy Kawasaki’s web site
Guy’s 13 books
Guy Kawasaki the Evangelist
Guy Kawasaki on the Twitter
Want to contact me? Go here
SoloLab, a Unique Mastermind
Be Proudly Unemployable with us on Facebook
Let’s connect on Twitter!