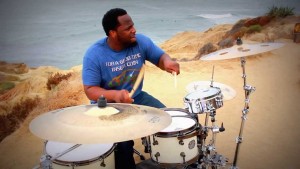 Musicians are inherently solopreneurs. They are hustling for their next gig, and always perfecting their craft. Joining us today to talk about that hustle is one of the best drummers you’ve never heard of, Tim “Figg” Newton.

On today’s show Tim and I talk about his love of the drums, how to overcome Impostor Syndrome and a solopreneur coaching lesson on making a six-figure income as a drummer. That’s all here on episode 301 of The Solopreneur Hour.

Tim is like so many of solopreneurs: he hasn’t put himself out there because he thinks he needs to be better. When in fact he really is great at what he does, and he is most certainly good enough to teach others!

This episode is a lesson in really understanding that most of the time what you know IS enough. All you have to do is know a bit more than the person you’re trying to reach. Once you’re there you’re ready to go out and help other people. You don’t have to – and nor should you – wait until you’re the very best.

Whether you’re a drummer, a musician or not at all musically inclined you can learn from this show; you’ll learn how to recognize your own Impostor Syndrome, how to overcome it and whether or not you really do know enough to take action.

Tim has a history of hustling. Before he was a teenager Tim was getting paid to play gigs. He grew up on gospel drumming and it shows; he’s one of the foremost experts on gospel chops today.

But he has gone the route of so many other talented musicians and solopreneurs: he focuses on his craft, not marketing what he already knows.

When I ask him about on this episode we have a chance to dive into his own doubts and self-criticism – something we have talked about on this show many times, The Impostor Syndrome.

You know you suffer from it if that voice in your head is always telling you not to do something because you aren’t good enough. Tim’s voice has been telling him he has to be one of the best before he can really put himself out there. So rather than marketing his skills and his knowledge ala Mike Johnston, he plays as many gigs as he can.

While that’s a good choice it doesn’t generate a lot of cash. Tim loves it because he gets to make a living playing the skins – what drummer wouldn’t want that?!

But there are several alternatives that would allow him to still play drums and play plenty of gigs (and be particular about the gigs he plays), but make a healthy income. And on today’s show Tim gets a live coaching session about what those alternatives are and which ones appeal to him.

I also break down a step by step plan for implementing some of those options, and check in to see what Tim thinks about the whole concept! There’s so much for you to learn, again whether or not you’re a musician.

As a whole this is an in-depth look at what a solopreneur coaching session is like so get your thinking caps on and strap in for this episode of The Solopreneur Hour.

QUESTION OF THE DAY: What did you learn from this coaching session about YOUR business? Let us know in the comments below!