466: How to Eat Happy with Anna Vocino 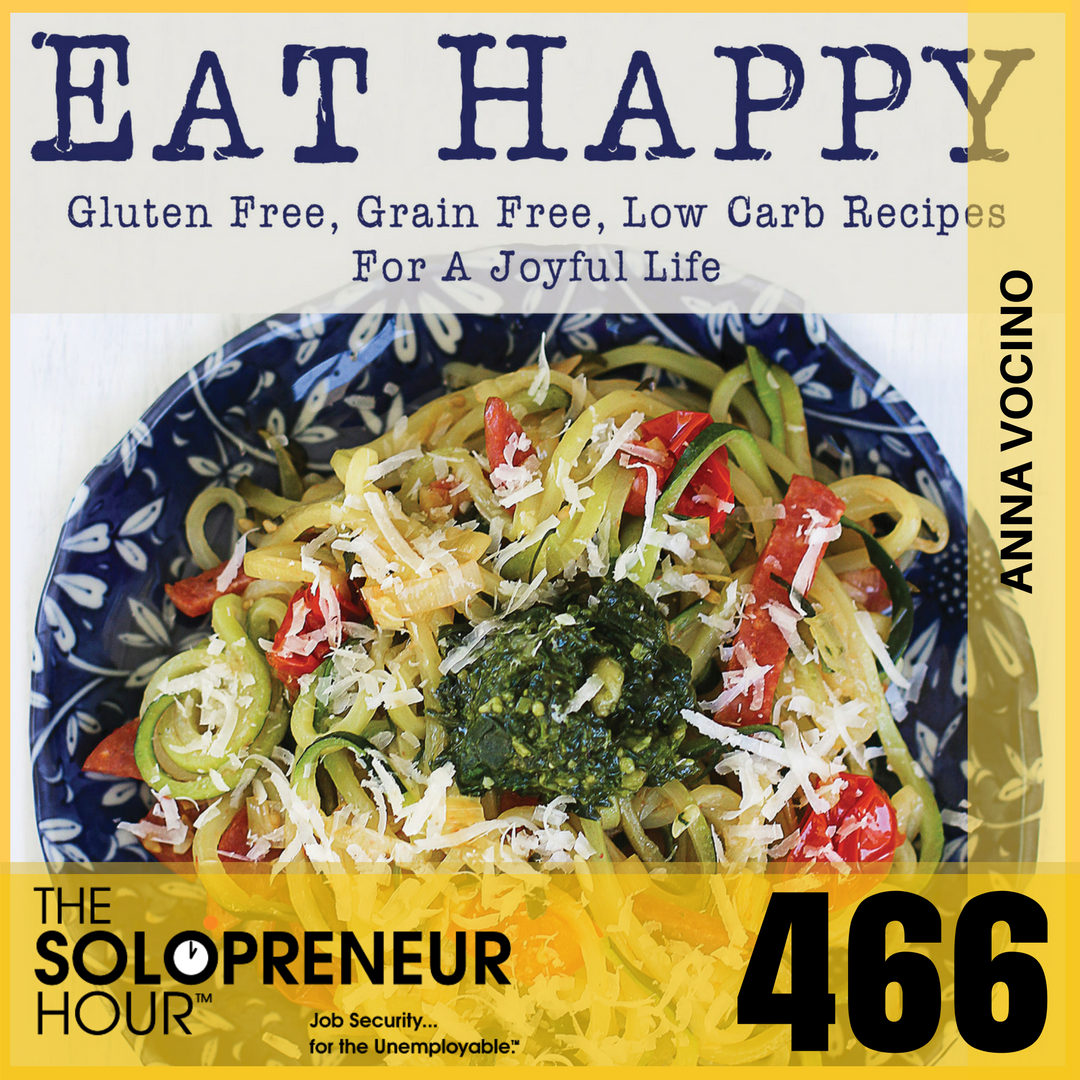 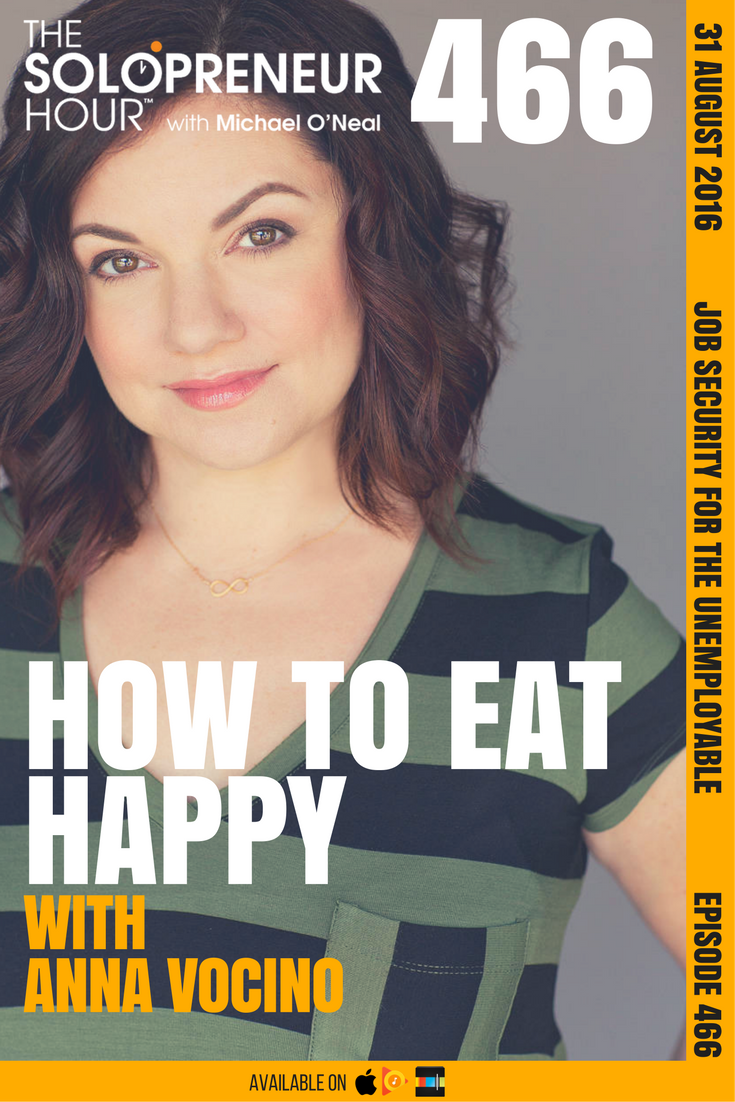 Good morning, good afternoon and good evening dear Solopreneurs joining us today from all around the world. As solopreneurs, we all dream about long and healthy life. Our returning co-host, Anna Vocino is back to share the kinds of foods you can eat to stay healthy and happy. Anna also talks about her new career in stand-up comedy, and her new book, “Eat Happy: Gluten Free, Grain Free, Low Carb Recipes Made from Real Foods For A Joyful Life”.

As it always is with Anna, it’s a great entertaining conversation packed with content and great ideas you can translate into YOUR solopreneur business! Tune in and enjoy your dose of The Solopreneur Hour.

In case you missed any of Anna’s previous visits to Solopreneur Hour shows, be sure to tune in and listen to them. In those episodes, we have covered too much about her background including her career in Hollywood as an actor, musician and comedian and how she has managed to sustain success. In this episode, we will give just a recap of his background. 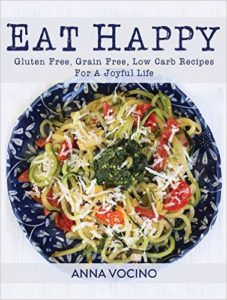 Anna is a talented actress, comedian and voiceover artist who knows what it takes to create a successful career in whatever she does. She has spent over a decade working on-camera and in voice over. She also produces the podcasts “Yoda And Me” and “America’s Angriest Trainer” with Vinnie Tortorich.

Anna knows that education is the key to success. She has dedicated her life to acquire much of it. She attended St. Andrews School for college prep from 1987 – 1991. In 1991, she joined Emory University where she studied a Bachelor of Arts degree in History, French and Cultural Studies.

Upon graduation from the university, Anna found herself truly unemployable. She wanted to work for herself. As a young lady, she used to believe that one day she would land on a certain project that would lead her to bigger and better opportunities. She knew that she was the one who determines the “bigger and better opportunities.” So she worked hard to achieve her goals of becoming a Hollywood star, blogger and internet marketer.

In 2002, she started her blog, annavocino.com, to recreate gluten free versions of comfort food favorites from her half Italian, half Southern-girl heritage. In 2012, she partnered with the inimitable Vinnie Tortorich to co-host and produce The Angriest Trainer Podcast, and her recipes these days are mostly free from sugars and grains.  She uses fresh ingredients whenever possible, and tries keep things simple.
Being the consummate solopreneur, you must be prepared to succeed in this world. Currently, Anna is working on numerous projects including a gluten-free cookbook. We discuss about her cookbook, what life has been like since she brought herself into the limelight, and how you can be inspired in order to stay healthy, fresh, and relevant.

There’s plenty of knowledge dropped in this show and lots of laughs. Just like Anna, several people who have been mentioned in this episode have chosen stand-up comedy as their soloprenuer gig. If you are planning to be a comedian, know that comedy is one of the most difficult soloprenuer gig you can think of.

To produce stand-up comedy piece, Ann sits down and brainstorms on everything that she think would impress her audience. She then keeps extensive notes on her notebook or app on the phone. After that she comes up with a premise because stand-up comedy is when one has a premise that act out.

Unless you bake in premises and jokes, storytelling in standup comedy does not work. On the other hand, premises and jokes can’t work if you’re trying to say something from somebody else’s point of view. You have to bring it back to what you think what’s true about this for you.

About Anna’s cookbook, it has 154 delicious grain free, gluten free recipes that are also free of any processed sugars. There are meats, fish, sides, soups, starters, casseroles, slow cooker recipes, breakfast dishes and even desserts to satisfy any sweets craving you might have all with virtually no sugar. If you are low carb paleo wanting to keep auto immune issues at bay or just want to lose extra weight, Eat Happy gives you comfort food you always dreamed of.

Anna emphasizes the importance of eating healthy foods. Usually our bodies are not equipped to handle all these processed foods with chemicals and a lot of unhealthy stuff. And we’ve made it so convenient to eat that way that lot of our food is held in our hands wrapped up in a sugar or a grain like a hot pocket or a pizza. When we’re not eating those kinds of foods, the inflammation can go down and we actually wind up dropping some weight fairly quickly.