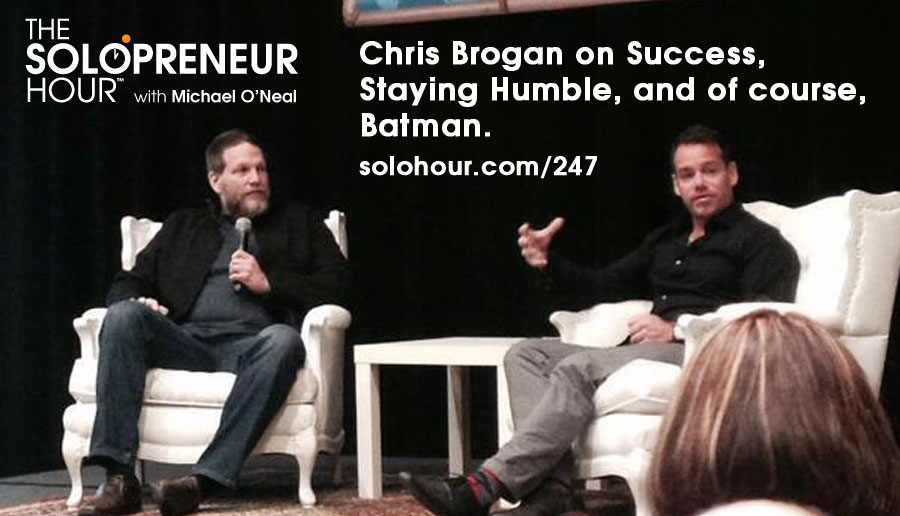 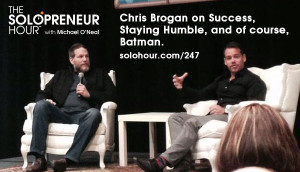 Episode 247 of The Solopreneur Hour is a very special show. I had the privilege of hosting 7 sessions called Speaker Spotlight during Social Media Marketing World and talking with 7 different speakers from the event. Chris Brogan was one of them and he was incredible!

Listen in while Chris and I chat about his love of Batman, his passion for creating human connections in business and his candid sharing about failure and success. All of that and more on this episode of The Solopreneur Hour.

If you’re not familiar with Chris he loves to explore how people use content and community to build marketplaces around areas of belonging. He is CEO of Owner Media Group, a highly sought after professional speaker and The New York Times best-selling author of eight books and counting, including his forth coming book, Belong: A Framework for Embracing Community, Driving the Economy and Building the Future.

During this conversation we sat one on one, with a live studio audience.  When you listen to the show you’ll hear how warm, transparent, and genuine he was during our chat.  I’d have him on every week if I could because he has so much wisdom to share; he truly creates value in every interaction.

Today we talk about his love of Batman (find out who his favorite Batman is!), and also the reason for his recent physical transformation. Two other topics we cover are how he overcame very recent failure and what CREATE stands for.

When Chris talks about his most recent failures he means pretty recently. In 2010 he says he was doing very well (he bought a Camaro with cash) but by 2013 he wasn’t able to pay one of the three people he needed to pay. Since he was one of those three people, he didn’t get paid and the other two did. It was a humbling experience, made even more so by the following year (2014) not being a whole lot better.

One of the questions you’ll hear on the show from an audience member was what led him to that place, and how he got himself out of it. Chris admits resting on his laurels and not taking enough shots.

He says if we want to be successful we’re always going to be moving to the next level, and we’re going to fail in the process. But the key to overcoming that failure is to look for more options, more angles and take more shots. We’ve got to fail, fail and fail to succeed. The only reason we stay stuck in failure is because we aren’t looking for more options, every problem can be solved if we look at enough angles and options.

A great success equation he also gives to the audience (and now to you) is the acronym CREATE. Take each component of CREATE, find which you are good at and which you can amp up. Doing so will lead you and your business to bigger, better things.

Here’s what CREATE stands for:

Chris truly is a wise man. Listen in to hear what other great stories and lessons he gives in this episode, like the time he ran his bike into his house when he was 5! You’ll laugh, you’ll learn and you’ll enjoy this chat with him, I am certain of it.

Please reach out to him on Twitter and thank him for this conversation, and thank yourselves for being. We’ll see you next time on The Solopreneur Hour.

QUESTIONS OF THE DAY: Where have you not failed often enough and what steps can you take right now to start failing more?

Selected Links From This Episode:

Chris Brogan‘s site
Chris Brogan on Twitter
Chris’s books
Chris’ charities:
Skip One
Invisible People
Kid Gigawatt
Want to be an ambassador for the show? Go here.
SoloLab, a Unique Mastermind
Be Proudly Unemployable with us on Facebook
Let’s connect on Twitter!