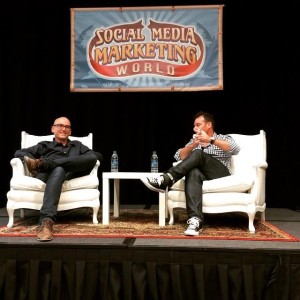 Every solopreneurs’ origins are different and usually play an important role in shaping who we become.

Our guest for today, Darren Rowse of Problogger, is no exception and has a fascinating origin story. We cover everything from his childhood days as a preacher’s son to his first foray as a blogger, and all points in between.

Torn between his love for blogging and his passion for photography, he’s created a pair of really successful blogs: one to pay the bills, and one to pay the soul.

This is the final in our series of 6 live author spotlight series from Social Media Marketing World 2015, please enjoy!

More About Darren Rowse and Problogger

Born and raised in Melbourne, Australia, Darren was the child of a preacher who lived a self-described sheltered life. They didn’t own a television for his first 10 years and he only listened to the radio one day when he snuck one home. He was 11 at the time, and discovered a whole new world when he turned it on!

But the one piece of technology his parents allowed him to have was a camera. When Darren stepped into a dark room and created his first image he was hooked. He was a creative child and loved that this piece of equipment gave him an outlet to create something that was indelibly his and his alone. His love and passion for photography has only grown through the decades.

Today he successfully runs two blogs: Problogger and Digital Photography School. He has made a great name for himself with both and has achieved things he never dreamt of when he started.

He initially began blogging in 2002 and over the years has created at least 30 different blogs. His first topic was about a church he was the pastor of. It was a different type of church: no hymns, no sermons, just people talking about their lives and God while eating together. The plan was to have no pastor within 1.5 years as well, the members (including Darren) had set it up that way.

So with his days numbered as their pastor, Darren juggled his other part-time jobs (he had 5 total at the time) and delved into blogging. It took almost 2 years before he saw real money from it, and he was able to leave all of his jobs during that period of time.

By 2004 he was making nearly a full-time income from his blogs, and he started Problogger. It was divisive time in blogging history: one group of people believed blogging could be a successful business platform to earn an income from. The other half believed blogging should stay pure without ads or any other money-making strategy behind it.

Clearly Darren was in the former camp and his journey with Problogger was meant to chronicle that experience. It didn’t take long after Problogger was started for people to call and ask if he would write a book and if he would speak about blogging. He was floored. In fact, he thought some of his friends were playing tricks on him and he hung up the first few times he received calls like that! Darren could hardly believe it was true, but it was.

Today he is happily at the helm of Problogger and Digital Photography School. He has found a way to successfully manage both and has found an outlet for his entrepreneurial interest in blogging and his lifelong passion of photography.

Tune in to hear him chat about what he’d do today if he were starting over in blogging and his suggestions for revitalizing a blog. Listen in and we’ll see you next time on The Solopreneur Hour.

QUESTIONS OF THE DAY: What would you blog about if you were to start a blog? Or if you already have one what is it about? Let us know in the comments below!

Reach out to Darren Rowse on Twitter
The blog on Problogger