404: Your Most Important Asset…Your Family, with Jim Sheils 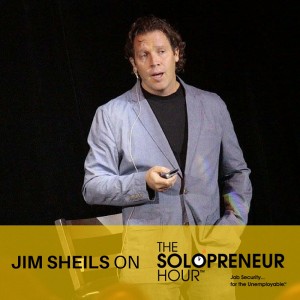 A lot of today’s Solopreneurs are extremely passionate about their children and create their businesses to help build better lives for their families. While building these successful businesses we get so caught up in our work that we sacrifice any meaningful relationships with our children.

Todays guest helps you reconnect with your children with a framework he co-founded called the Family Board Meeting.

Jim Sheils is a highly successful real-estate investor and the co-founder of Board Meetings International, a company that specializes in mastermind retreats for successful entrepreneurs and their children.

Board Meetings International uses a combination of experiential education and fun activities like surfing and other oceanfront adventures to deepen their relationships and teach vital life lessons not taught in school.

Jim Sheils was born and raised in northern New Jersey, Jim in his early 20’s was in a bar late one night and decided this life was not for him, he did not want to go down the same path some of his buddies were going down. He was at a job he hated (Pharmaceutical Advertising – Designing Sales Brochures for Doctors symposiums on irregular bowel syndrome.) and called his best friend up who had recently moved to Arizona, they then both moved to Santa Barbara to begin a 17 year partnership in Real Estate investing.

More recently Jim done one of the most selfless things someone could do for somebody and donated a kidney to his father.

His dad, even though he was already in his 70’s was a good candidate for the transplant because of the longevity of his father’s family. The kidney problem started decades ago when Jim’s dad, he describes as “a stubborn old Irishman” refused to get antibiotics for strep throat, (which is a sore throat with fever caused by streptococcal infection). He decided to “tough it out” and the condition went away, but if you don’t get the antibiotics to fight the infection it actually lodges in your kidneys and he got a kidney condition that came to fruition years later.

Five years ago he went into almost renal failure and was in hospital for about 40 days. Jim decided what was going on was ridiculous and said to his father he will donate one of his kidneys. After much arguments with his father and research and conversation with his wife they went ahead with the transplant.

Donating the kidney to his father was an almost spiritual experience for him and was partly the reason for the creation of Board Meetings. It wasn’t just the relationships with his sons but also the 1-on-1 time Jim spent with his father.

The lesson Jim learnt from this experience was life is about connections.

Jim and his partner have been in the real estate game now for 17 years after moving to Santa Barbara . They started with $12,000 each of savings and decided to buy and sell hud foreclosed homes in Bakersfield, California as Santa Barbara was too expensive at the time.

After going back home to New Jersey in 1999, they managed to pull in more investment from people they knew to buy more homes in the Bakersfield area in return for profit on their investments.

Teaming up with a successful realtor in Bakersfield opened a lot of doors for Jim and his partner, She helped hire small contractor crews around Bakersfield to do the rehab work. They built the relationship deep, even to the point where she would loan them money.

After moving to Santa Barbara, Jim got bit by the surfing bug. This has been where a lot of business has been done for Jim and a lot of deep relationships have been formed.

After selling 9 of their first homes in Bakersfield, which went well but they had become totally frustrated and overwhelmed with growing the business, they went to an event in Vegas called Money Mastery.

At this conference they met a couple of guys from the Gold Coast of Australia, to which they are still friends to this day. They came back with them to Santa Barbara where they help Jim with his business and masterminded for the week.

Things went great and they continued to do what they called “Board Meetings” where they meet in different places around the world and surf in the mornings and mastermind about the businesses in the afternoon. These meetings have happened now for 16 years.

Principles to the Family Board Meeting Framework (52:27)

“There is no substitute for quality time.”