436: Marcus Sheridan On What To Do When Things Don’t Go As Planned 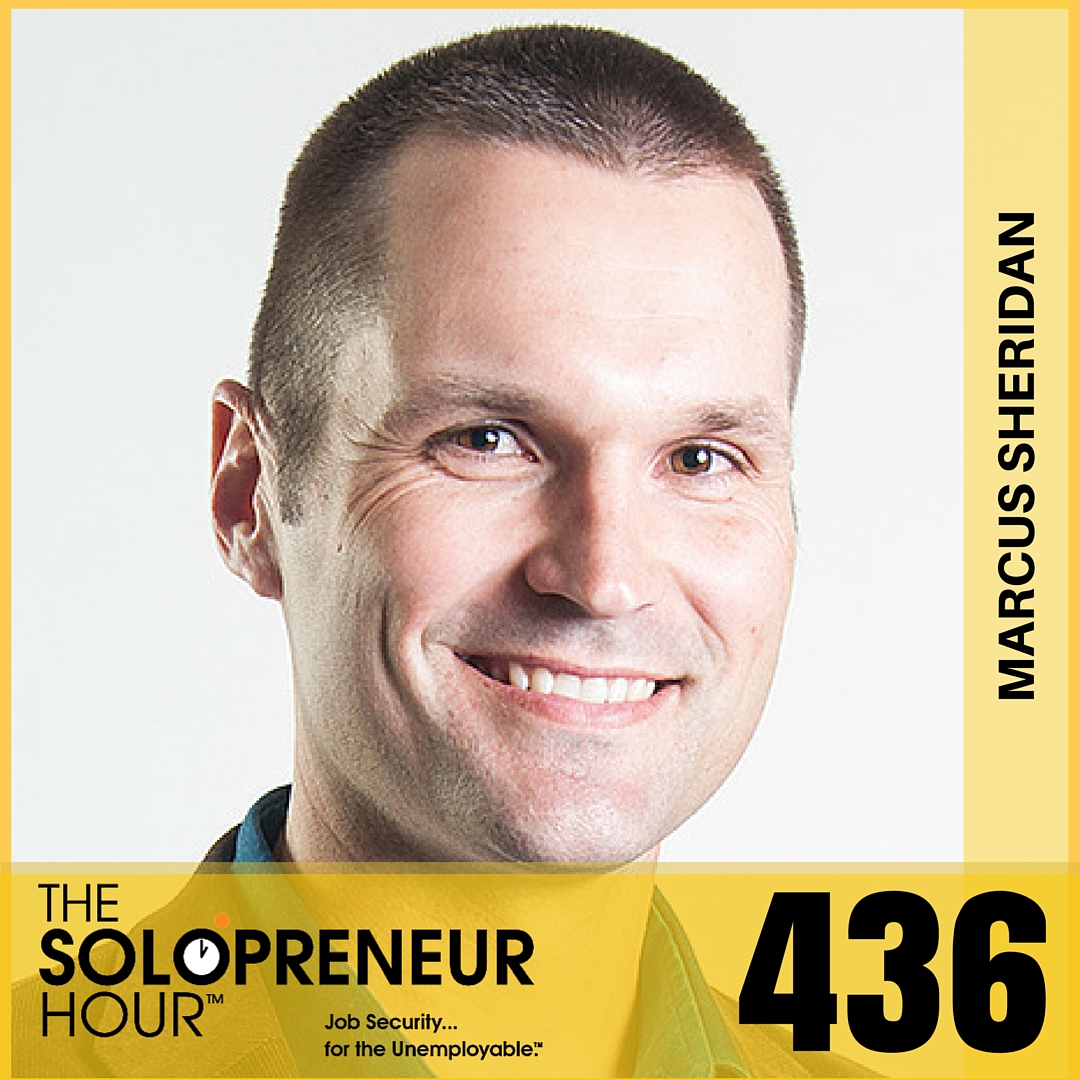 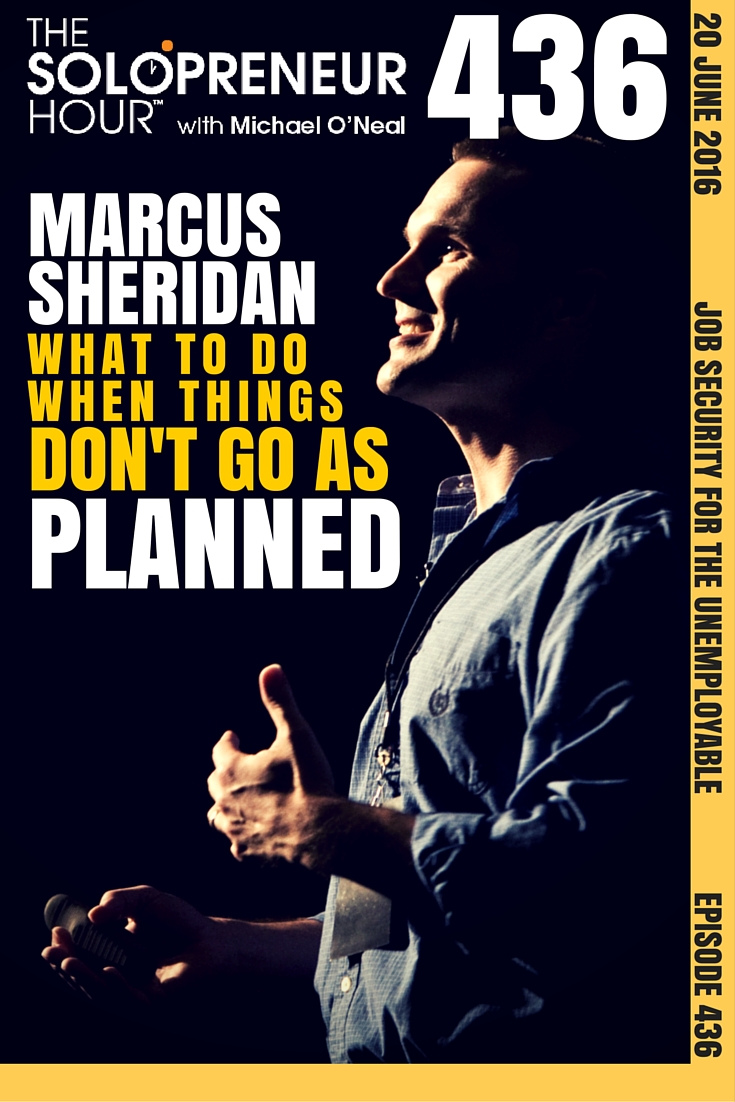 Marcus Sheridan, (https://thesaleslion.com) had a chance to interview Gary Vaynerchuk in front of 3000 people at Social Media Marketing World 2016. He researched, planned, and researched some more.  But sometimes things don’t go according to plan.  Find out what he did when things went off the rails, and how he responded to adversity, on this episode of The Solopreneur Hour.

[spp-tweet tweet=”You cannot see the end of the trail until you start walking – Marcus Sheridan Episode 436 of Solohour.com”]

Marcus Sheridan raised in a small town of Callao, Virginia. In 1995, Marcus graduated from Northumberland High School. He attended graduated magna cum laude from the West Virginia University. He graduated with a B.A. in Spanish with a minor in Physical Education. In high school, Marcus served as the captain of the football, baseball, and wrestling teams. Between 1997 and 1999, Marcus served as a church missionary in Chile. Sheridan is also the author of three self-help books that are all published. These books include Stop the Yawns, Heavenly Father’s Angels and Teen Talks to Stop the Yawns. Marcus owns and founded of The Sales Lion.

Marcus Sheridan is the founder of www.poolschool.us, which is among the most informative and educational swimming pool online sites. Marcus married his high school sweetheart, Nikki, and they both have four children: Danielle, Joseph, Larsen, and Casey. In the year 2007, the Indiana University named him as the Young Entrepreneur in Residence. Marcus is the first person who came out with a rating system for the fiberglass pool manufacturers.

His successes can be traced as a communications and business leader from his missionary activities in Chile. Having never spoken Spanish before, Marcus was put in a position to teach and speak to large audiences, which eventually killed his fears of public speaking. This fear would later turn into a great strength. By the time he ended his mission in Chile, he had already realized he had a knack for communicating to others. He later utilised this ability by becoming a full-time professional speaker.

After his missions in Chile, it was when he married his wife, Nikki, and completed his degree at West Virginia. In his quest for his first job after college, his two close friends from home approached Marcus. The friends had just started a company in the swimming pool industry- River Pool and Spas. The two friends asked Marcus to be their first employee in the fledgling company. He responded positively to the request and joined the company.

Charged with running the place as his two friends were working out, in the field. He stayed on in the company and later became the third partner in the enterprise. The company had been running okay until 2008- this was when the stock market experienced a major collapse. This failure resulted in a drastic fall in the values of the homes. This way, few people could afford luxury goods leave alone in-ground swimming pool. It was in these stressing business moments that Marcus started to study online marketing principles. He engaged himself in reading things like inbound marketing, social media marketing, and content marketing among others.

On reading the principles of marketing, Marcus, and his partners realised they needed to be great communicators, and this would help them act like consumers. By acting as a consumer, they could be able to answer any question online leading to more traffic on their website and this translated to increased sales. With their 20-page website, they brainstormed any consumers’ issues and turned them into titles of blog posts. He and his partners would then answer the questions without ignoring any questions from the customers. Currently, the website has 850 pages, and it is among the most trafficked in the swimming pools industry. This way, Marcus and his partners were able to grow their business in times of economic chaos.

The Birth of The Sales Lion

Marcus, with his success in the River Pools and Spas, started writing about what he was doing with his swimming company on the website. Additionally, he would write the same on a separate blog that he started in November 2009. When he began seeing some action on his personal blog, he named it “The Sales Lion.” Since then, the Sales Lion has experienced excellent growth. With this increase, Marcus has become a major voice in the content marketing field.

The Sales Lion has given Marcus a platform to continue with his communication and excellent teaching. He holds the belief that communication can influence businesses positively, help in building brands and facilitate in dominating niches. Marcus goes around speaking to companies about how great teachers and communicators can impact their operations. He gives workshops as well as speaking at conferences, something he loves to do. Marcus still holds the company, though his two partners run it while he goes around talking to firms.

Marcus has developed a large following for The Sales Lion. Through his focus on an array of marketing, sales, and personal development issues. The Sales Lion received recognition as among the top ten social media platforms on the internet. The Sales Lion’s momentum led to significant business and speaking opportunities for him and his partners. Internationally, Marcus and his friends are renowned for workshops, sales and marketing coaching, keynotes and HubSpot training.

Marcus has had his stories featured in several publications including The New York Times, Entrepreneur Magazine, and Canada’s largest newspaper, The Daily Globe, and Mail among other prominent publications. Marcus has been privileged to speak at events such as Social Media Marketing World in 2013, Explore in 2012, Blog World/New Media Expo in 2011, and Content Marketing World Keynote in 2012 and 2013 among others.

Away from all these successes, Marcus remains married to his wife, Nikki, and a father to their four children. In every event or conference, at least one member of his family accompanies him. His hobbies include all sports especially racquetball, reading and writing. His interests are WVU football, studying and reading the classics, human relations, motivational speaking, and watching the UFC. Marcus looks up to Ted Lyon, his mentor in Chile. The reason behind this was Lyon was full of compassion and love for others in addition to living a life of hard work and service. His late grandfather was a source of great inspiration.