439: Founder of The Onion, Scott Dikkers 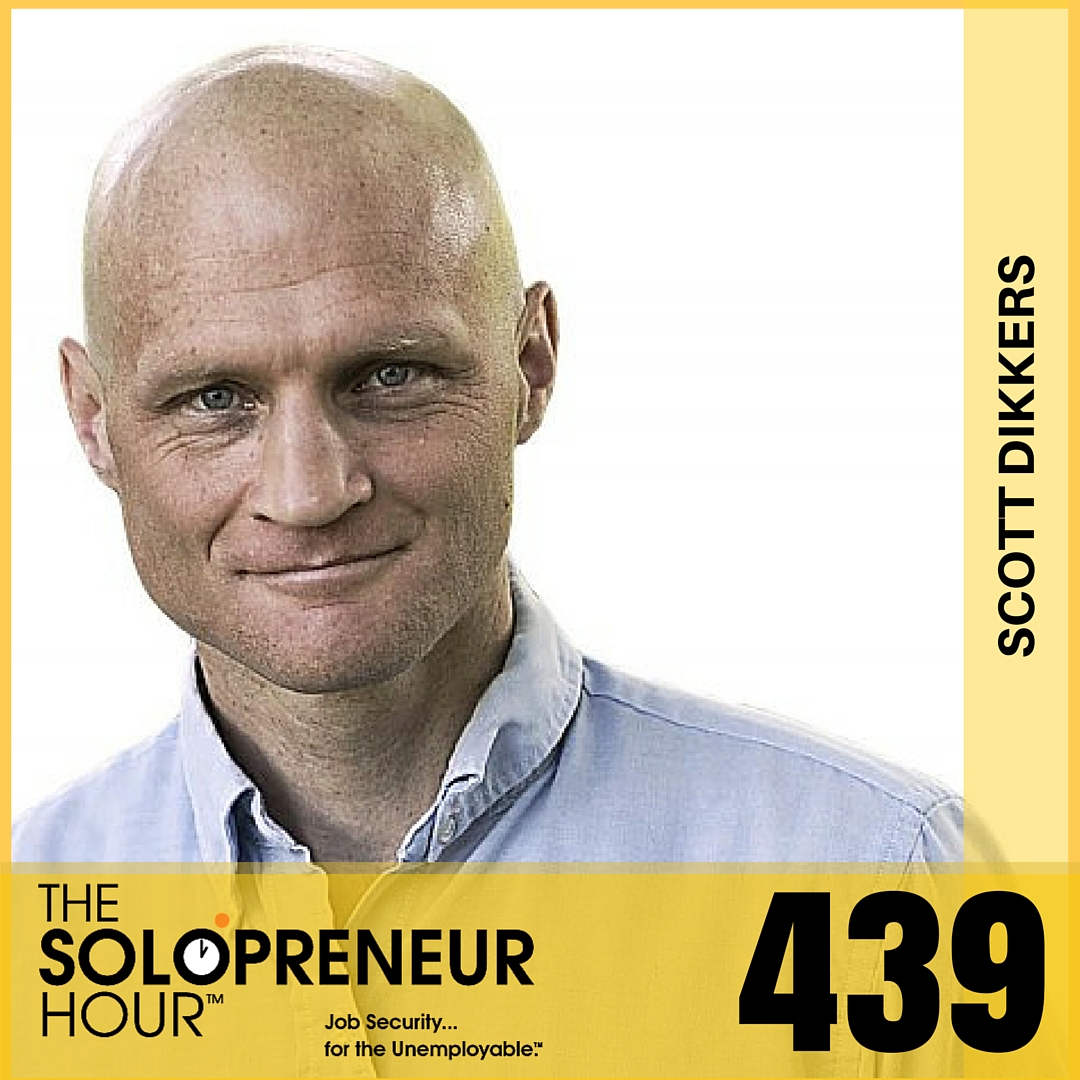 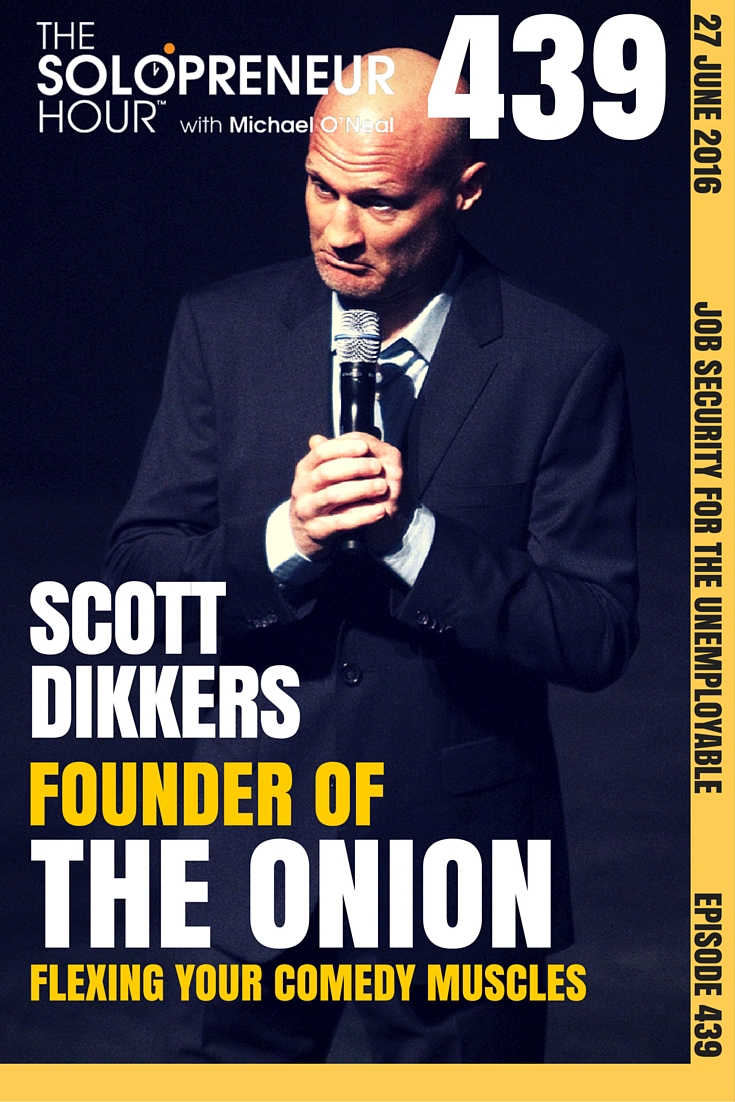 The Onion is one of the most consistently funny publications I’ve ever come across. This is a very special episode with a man who’s spent his career making others laugh.  This is a show full of twists and turns, and it reveals that sometimes comedy is a product of real life drama.

Scott Dikkers, the famous American comedy writer, entrepreneur, and speaker, was born in Minneapolis, Minnesota, on March 1, 1965. He has authored and coauthored many bestselling humor books, the majority of which still enjoy significant popularity all across the globe. Dikkers, however, first came to prominence as the artist and creator of the comic strip titled Jim’s Journal.

The world started talking about Dikkers’ talent and uniqueness when he founded the planet’s first humor website TheOnion.com. The introduction of this site changed the world of comedy significantly.

Dikkers has also showcased his creativity and amazing sense of humor through a number of films. Spaceman, which was released in 1997, was his first feature film. It was a science fiction film boasting a serious touch of rich comedy. He went on to direct Emmy and Golden Globe-winning comedian Chevy Chase in his 2003 movie Bad Meat.

It’s impossible to describe Dikkers’ achievements, and legacy is brief. It’s probably because the man managed to reach the top at a very young age and has succeeded in remaining there for almost three decades.
Dikkers and Jim’s Journal

Dikkers’ first prominent creation Jim’s Journal appeared in The Daily Cardinal, a newspaper published to serve students at the University of Wisconsin-Madison, for the first time way back in 1988. Since then the guy has never looked back.

Dikkers created Jim’s Journal with the aim of parodying the customary four-panel comic strips. The strip was character-driven and included a central character that didn’t have any distinct personality. There used to be no observational humor, and the strips didn’t even provide any insight. They used to end without any gag, and some of them didn’t even have a conclusion. In words of Dikkers, they were “anti-humor” strips. He used to say that the content of those strips created humor by making fun of other humor.

Jim was the protagonist of the comic strip. The strip, however, didn’t feature experienced processed by him. Jim used to record all his experiences as he moved passively in his world. It’s true that the author of Jim’s Journal chose not to provide any context, but every single individual who has the experience of living in a shabby apartment building, doing a minimum wage job, or has been to college, will not find it difficult to come up with a suitable context.

The comic strip shows Jim muddling through school and several blind-alley jobs along with some of his friends. All of them have vague dreams of being part of the space project or the entertainment industry, but none of them ever tries to turn their dreams into reality. Also, these people share another amazing thought. For them, life is never meaningless or absurd; the only word that can describe life, according to these people, is “funny”. Jim says that it’s okay if someone just exists and places an order for a pizza now and then.

This weird, but amazing comic strip appeared in the university’s newspaper till 1997, after which it was discontinued for unknown reasons. After a hiatus of 14 years, the online version of the strip was made available to the public. Since April 2011, Jim’s Journal is getting published on GoComics; the newly published series included both classic and new comics.
Life at “The Onion.”

After earning significant fame as the creator of Jim’s Journal, Dikkers decided to do something different. Soon, he founded TheOnion.com. He was associated with The Onion, which happened to be the mother company of the website, since the day of its inception, as the founding editor. The Onion started its journey in 1988 as a weekly print publication. The website was launched in 1995.

Scott Dikkers is the company’s longest serving editor in chief. He held the position twice, first from 1988 to 1999 and then again from 2005 to 2008. From 2012 to 2104, he adorned the position of Vice President/General Manager of the company’s Creative Development department.

As expected, Scott co-authored the very first original book written by people working at The Onion. He was also the book’s chief editor. It was a satirical humor book titled “Our Dumb Century”. The book satirized a number of common perceptions, trends, and beliefs.

Our Dumb Century turned out to be a bestseller. More than a million copies of the book were sold, and it grabbed the #1 position among bestsellers on Amazon and New York Times. The success of their first original book forced people at The Onion to publish their second original book under the leadership of Dikkers. However, it took them a lot of time to come up with the second book. While Our Dumb Century was published in 1999, the next original book from the house of The Onion was published in 2007. The book was named Our Dumb World. This creation of Dikkers and his team also managed to make the bestseller list published on the New York Times.

The mid-2000s saw another revolution taking place. Scott and his talented team created a web series titled “The Onion News Network”. Scott was part of the project as its executive producer and director. This special series became the breeding ground of viral videos. In addition, it also gave birth to a television series IFC.

If there’s anyone, who should be given the credit for turning The Onion from an unknown, small college comedy publication into a globally recognized humor brand, it is Scott Dikkers. Other than using his own talent and skill for taking the publication to newer heights, he also succeeded is forming a team of immensely talented editors and writers. Together, they built a culture of brutal honesty and creative freedom at the Onion.

Dikkers’ works have been recognized by a number of prestigious organizations across the globe. For instance, he once grabbed the #43 spot among Top 50 “Cyber Elites” listed by the Time magazine. That was a truly commendable achievement as he was part of a list that consisted of names of iconic figures like George Lucas, Steve Jobs, and Bill Gates.

Dikkers wants the next generation to learn real comedy. So, now he has concentrated on teaching. Right now, he is busy mentoring aspiring writers as the head of the “Writing with The Onion” Project, a writing workshop organized by The Onion in partnership with The Second City.

Here are the 11 funny filters to write jokes, the 11 ways that you can be funny. Note: examples are from The Onion so all credit goes to them for being funny.

[spp-tweet tweet=”They are going to be the death of us all, those people that don’t walk on escalators – Michael O’Neal & Scott Dikkers EP439 of Solohour  “]