451: Dan Martell on Looking Outside The “Online” Space for Strategy and Innovation 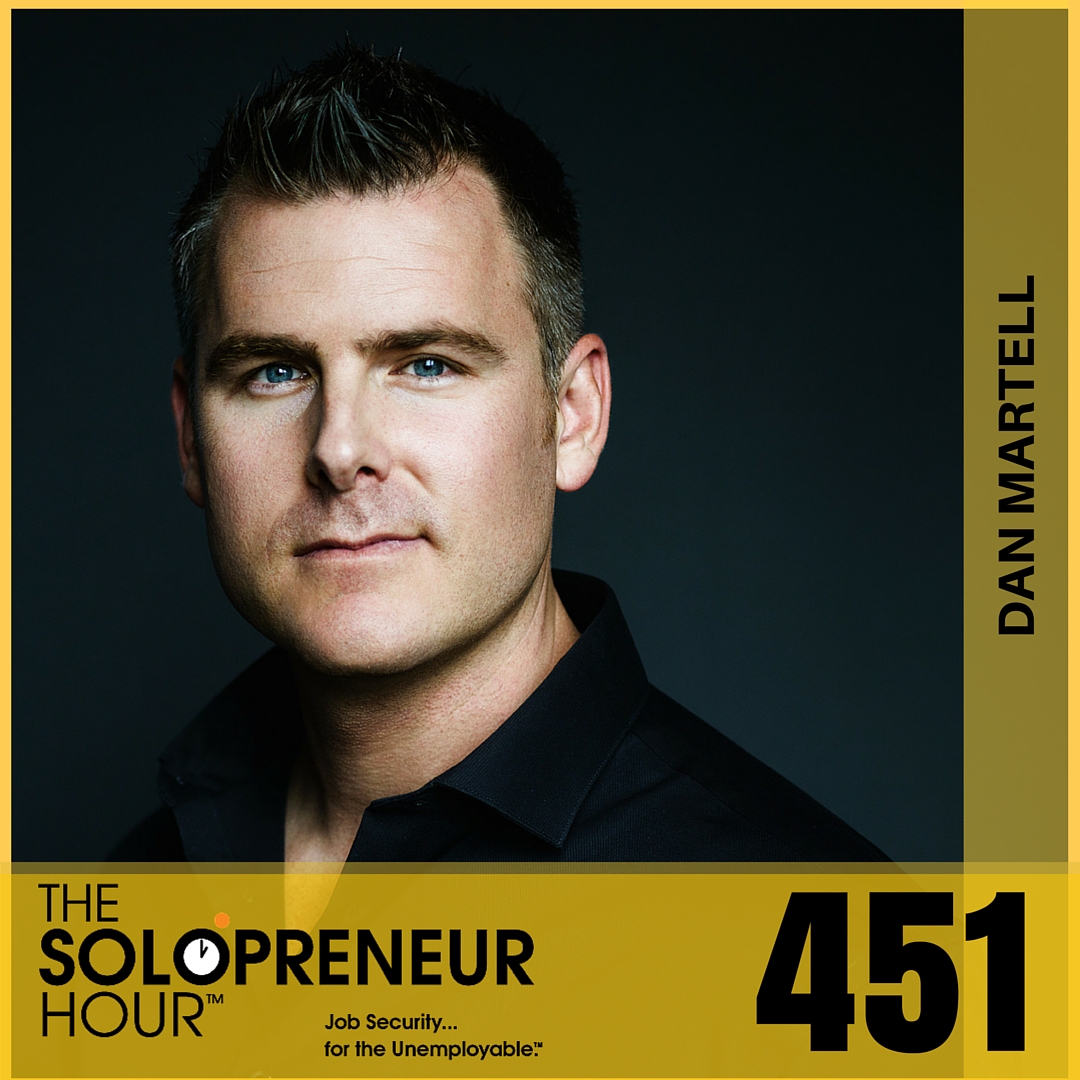 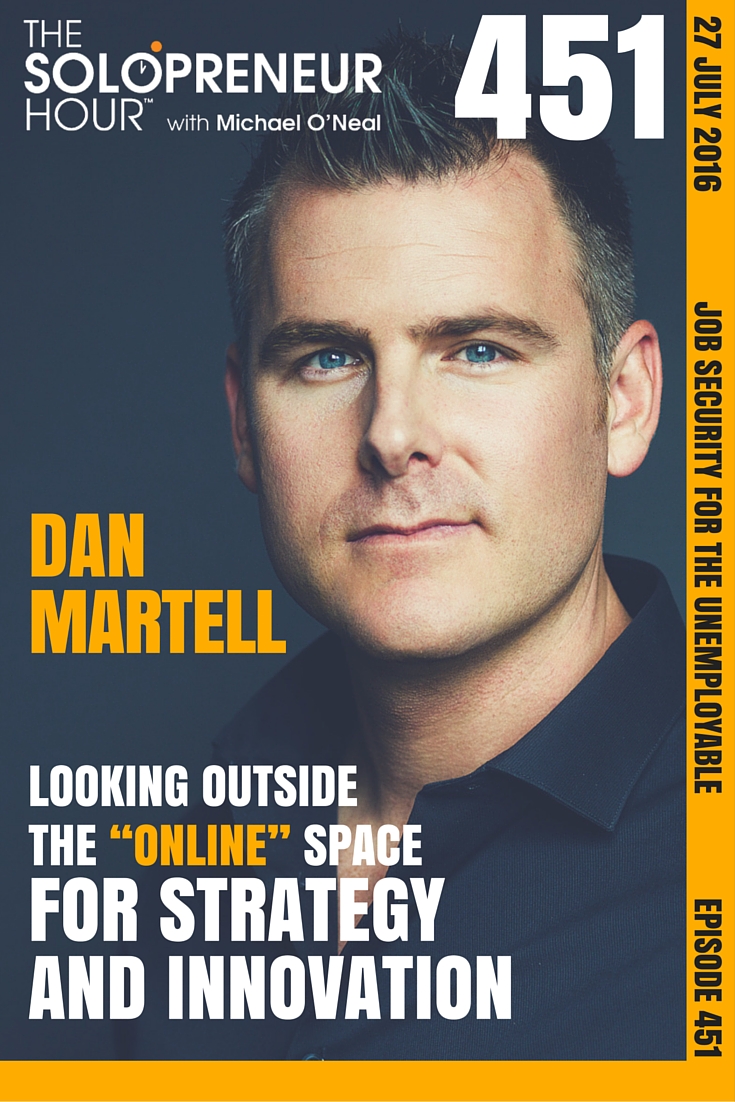 Back again is crowd favorite Dan Martell (https://danmartell.com), in person at the Amplify LIVE event in Vegas in July, 2016. Dan never ceases to amaze me with his ability to think outside the box and innovate.  He not only shares what a fan of his did to work with him, but also how he’s not afraid to look outside the industry to inspiration.  Another can’t miss episode.

Dan Martell is an award-winning serial entrepreneur and angel investor. He is the founder of five up-and-coming companies including Clarity, Flowtown, Spheric Technologies, Mentor @ 500Startup, and GrowLabs & theC100.org. As an angel investor, he has provided capital to more than 33 startups, some in exchange for ownership equity while others for convertible debt.


Dan’s journey through life was not smooth. His life is full of ups and downs, twists and turns. At a special Mastermind Talks entrepreneurial event which was held in Toronto, Canada, Dan surprisingly revealed that he wouldn’t have been successful if it weren’t for a rough life.


He was born and raised in Moncton; a city located in Westmorland County in the Canadian province of New Brunswick. Dan opened up about coming from a poor family, raised by an alcoholic mother and a salesman father who rarely visited home.


While aged 12 years, a juvenile court ordered him placed in foster care. He didn’t last in one family for more than a month because of his constant distress. He was therefore moved from one temporary home to another. He returned to his family’s home after a year, but he didn’t found solace there. Life took a turn to the worst. Sadly, his parents divorced, he stopped going to school and found himself involved with hard drugs living a life full of crime.


At the aged of 16, he was sentenced to two years in jail for selling drugs to the daughter of the chief of police. He got it rough while in jail and promised himself that he would never get into the wrong side of the law again. He came out of prison a changed young man, but he later resumed his addict lifestyle. Nine months later, he was arrested for driving while high on PCP and driving over the limit. He was found guilty and taken to an adult correctional facility. He was placed in a rehab facility called Portage Atlantic near Sussex in the Canadian province of New Brunswick.


It is Portage’s structured treatment programs that saved Dan’s life. They helped him get back on track in his journey towards a drug-free life. His anger towards everything was replaced by regret, repentant and a new sense of purpose. He was helped by the rehab’s caring and friendly staff, all of whom were recovering addicts. After two years in the rehab, Dan finally returned home aged 19 beating the relapse statistics. He went back to school which also contributed to making a great difference for him.


After school, he raised more than $2M that he used to start Flowtown and later Clarity.fm; two companies that he grew and successfully exited. Clarity’s mission is to connect its members by telephone with business networks and expert mentors who provide advice in areas such as sales, marketing, and business development. He started this company using the experience he gained from operating Spheric Technologies and Flowtown.


Clarity was launched in January 2012 in New Brunswick and opened in May 2012. The company was started by Dan himself by partnering with a group of around 1,000 advisors, including Color and Science labs co-founder Peter Pham; lean startup expert Eric Ries; angel investor Dave McClure, and 500 Startups. It started with four full-time employees and by the end of 2012, it had eight employees.


The company started with an emphasis on technology and entrepreneurship but later expanded to include business models such as fitness, restaurant, and networking. By October 2012, Dan and his employees had processed over 12,000 calls through their services. On December 4, 2012, the company announced that it had raised US$1.6M of the initial capital used to start the business.


Dan is an entrepreneur who wants news challenges. Despite the enormous growth and success of Clarity, he sold the company to Fundable of Columbus, OH, to concentrate on his other businesses.


Currently, he is committed to danmartell.com where he helps people grow their businesses. Those who subscribe receive a free weekly newsletter and instant access to three most important videos that teach on how to drive more customers to any business.


He has also launched Idea to Exit Live; a site that shows a roadmap of the entrepreneurial business journey. The site helps people learn about entrepreneurship, helps them establish their businesses and tracks their progress.


Some of the lessons that he offers at this new site include direct lessons of building businesses; viewing business plans; judging hundreds of pitches; guiding entrepreneurs on management consulting projects; challenges and realities of entrepreneurship and much more. The lessons also cover seven stages of the life of entrepreneurship which include Assess, Discover, Fund, Prove, Scale, Execute, and Exit. 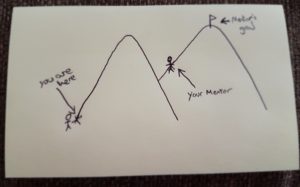 You are here in the bottom left-hand corner of the valley. Your mentor, the person you look up to is up to the right a bit and they are on a journey to go even further up into the right.

You got to ask yourself and put a little work in and say ,what could you offer up as value to them so they could potentially reach the next level, what does that person need to know or execute on to reach the next level. Don’t just ask the person how can I help.

An example would be to rewrite a sales letter then send it back to them as a doc or a pdf, something they can actually use. Provide value