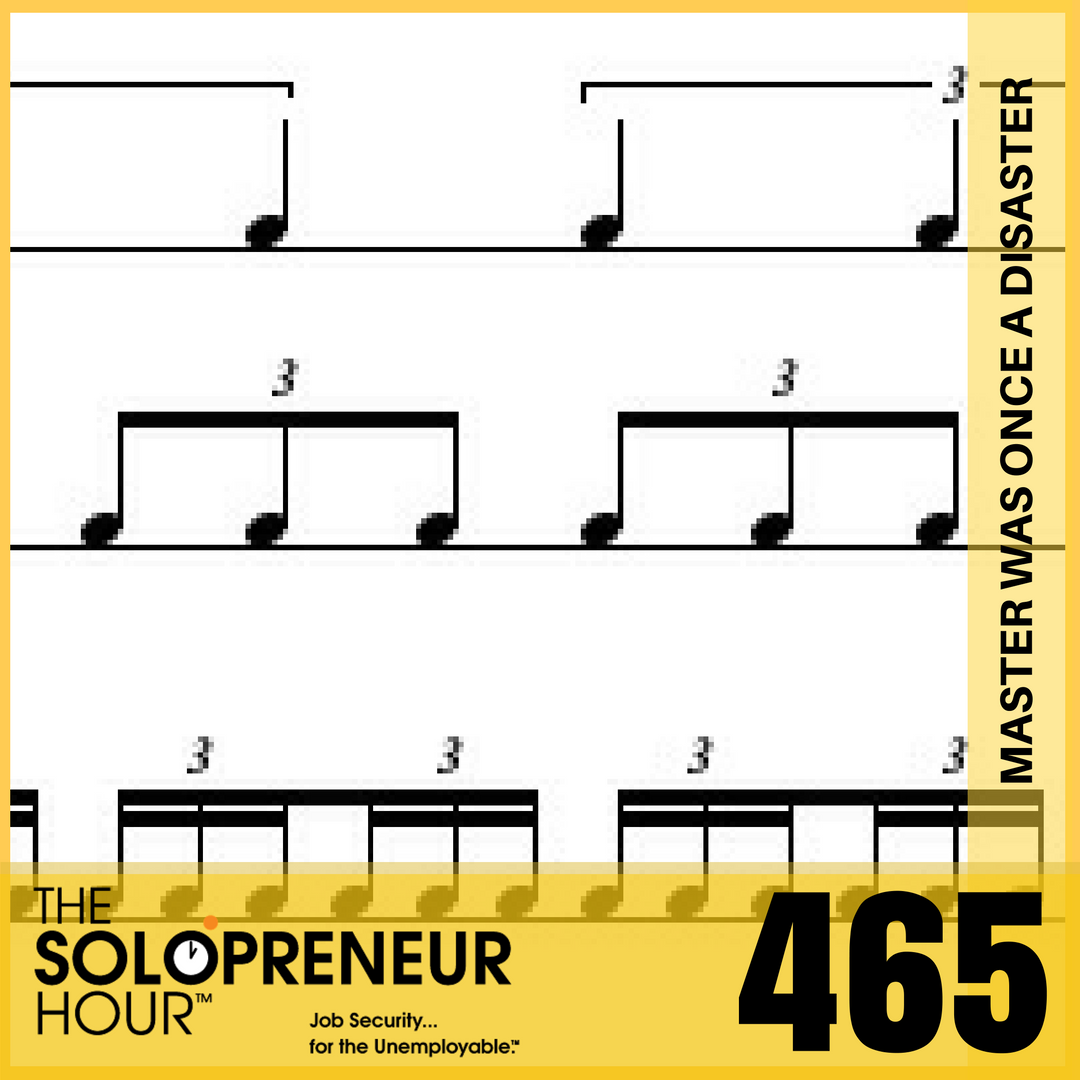 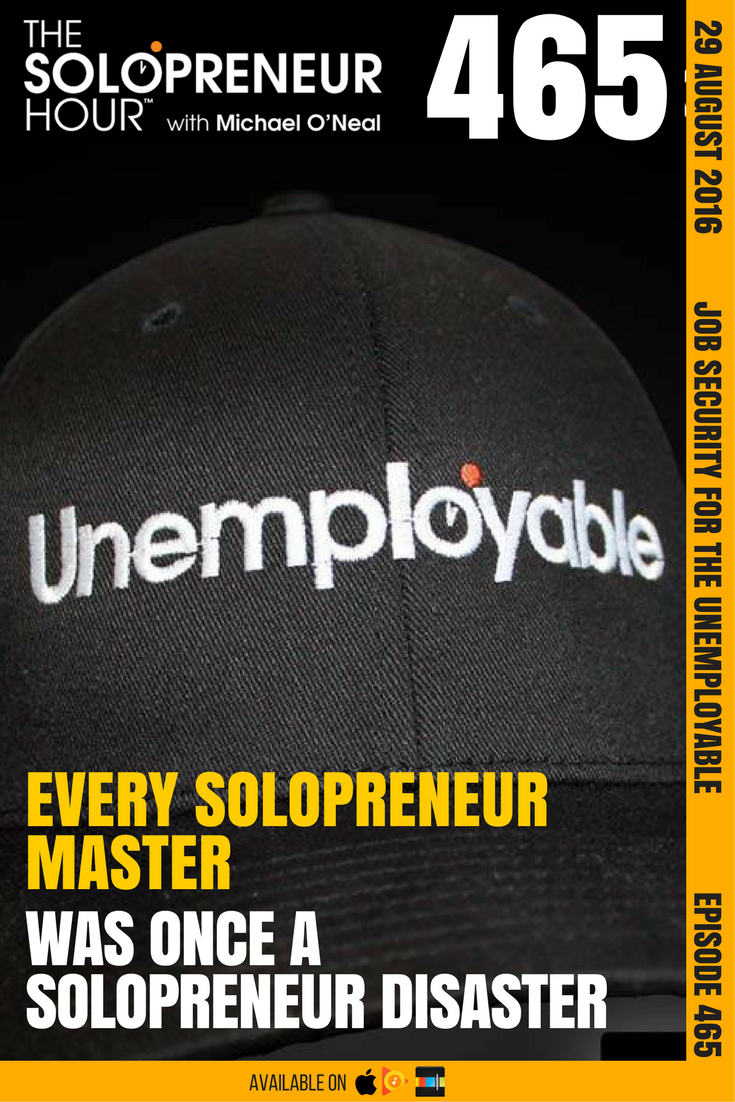 “Every master was once a disaster!” David Wood

If you’ve ever despaired that you “aren’t good enough” at whatever you are doing, like you are terrible at those things or people won’t accept you, then this show is for you.

Every Solopreneur Master Was Once a Solopreneur Disaster. Listen in for all of that and more on Episode 465 of The Solopreneur Hour.

I then read a chapter from my upcoming book, “Unemployable™” (Working title)

Learn how to crush conferences and events with my FREE Conferencetopia course!

Why should you listen to Michael O’Neal and not any other individual out there? Well. This is everything you need to know about me.

I was born in Ohio and spent 12 years there being raised in a Catholic family. As a kid, I participated in every sport known to man from skating and cycling to swimming and gymnastics. Just like other kids being raised in American suburbs, I got in a lot of trouble both at home and in school.

At 12, we moved to a new community in the outskirts of Philadelphia. We were fed up with ground zero for problems in this state something that forced my parents to look for a different location to relocate to. So in between 10th and 11th grade, we moved down to Spring Hill, a little redneck town in Florida. My parents seemed to like everything down there, but I hated every second that I spent there. I bolted back to Philly for my high school diploma. Here, I got a good opportunity to move around the East and South Coast States. I remember having stops in Long Beach Island NJ, Newark DE, and Palm Beach FL.

About formal education, I’ve dedicated my life to acquire much of it. I graduated from music school in Palm Beach FL. In 1994, I graduated from Temple University with an undergraduate degree in communication. I have also done several professional courses about internet marketing and web development.

Upon graduation from the university, I became a web designer and worked in this field for 15 years.  In 1997, I moved to Boulder Colorado where I lived for almost 13 years until 2012 when I moved to San Diego.  After a few frustrations working for other people, I found myself to be truly unemployable. I realized it was the time I used to work for myself. So since 2005 till today I have been on the entrepreneurial track working for myself.

My journey to becoming a Solopreneur Master has not been as easy as you may think. I tried to do everything I would through 2008, but those things didn’t have much success. In 2009, I knew that I no longer wanted to trade a dollar for an hour, so I went looking for something else.  That’s when I found the hidden treasures in network marketing and internet marketing.

In August 2013, I started The Solopreneur Hour Podcast which aims to show the other unemployable people the correct path to business success on their terms.

In today’s show, I have highlighted the exciting journey of Solopreneur Masters because I think it’s easy to look at.

In this episode, you’ll hear:

My career doubles as a professional trainer and coach. It has been four years since I found this treasure. The transformation it has made in my life has been nothing but profound. I have met amazing people in the internet marketing, network marketing, entrepreneurship and life coaching world.  Every single day I learn from them, and they impact me.

Today, I want you to think about the initiatives that you are doing right now that you are not that great or better at. Reflect on the things you aren’t doing that you want to do but you are afraid because you think you are not good at them or going to succeed doing them. The only way to get ahead is to think about those things and then say, “OK. I’m moving on now, and that is what I’m going to do.” That’s the only way to go ahead in this Soloprenuer game. It may feel awful doing them, but you don’t have to be an expert at everything all the time.

Whatever you want to do or achieve, you must have the strength to do it without taking it personally. Any frustrations you will face in doing such things are part of the journey to becoming a Solopreneur master.

Every master was once a disaster. If you are what you are doing is a disaster, just do it well and right. With time, that thing which is proving a nightmare or giving you sleepless nights might turn out a success.

In this show, you will also get inspirations on how to choose the right Solopreneur gig for you. For instance, Joel Comm, one of the successful Internet influencer and New York Times Best-Selling Author continually innovates in the space and looks for whitespace in various industries. In a nutshell, there are hundreds if not thousands of ways you can start making money as a Solopreneur, and some are very well-established, and some haven’t even thought up yet.

You will also learn the importance of patience in solopreneurship. Everybody wants everything to happen now. This sometimes derails their motivation and planning for the future. The truth is this process takes a while regardless of the solopreneur gig you choose.