714: What To Do with Your Million Dollar Idea, with Stephen Key (best of) 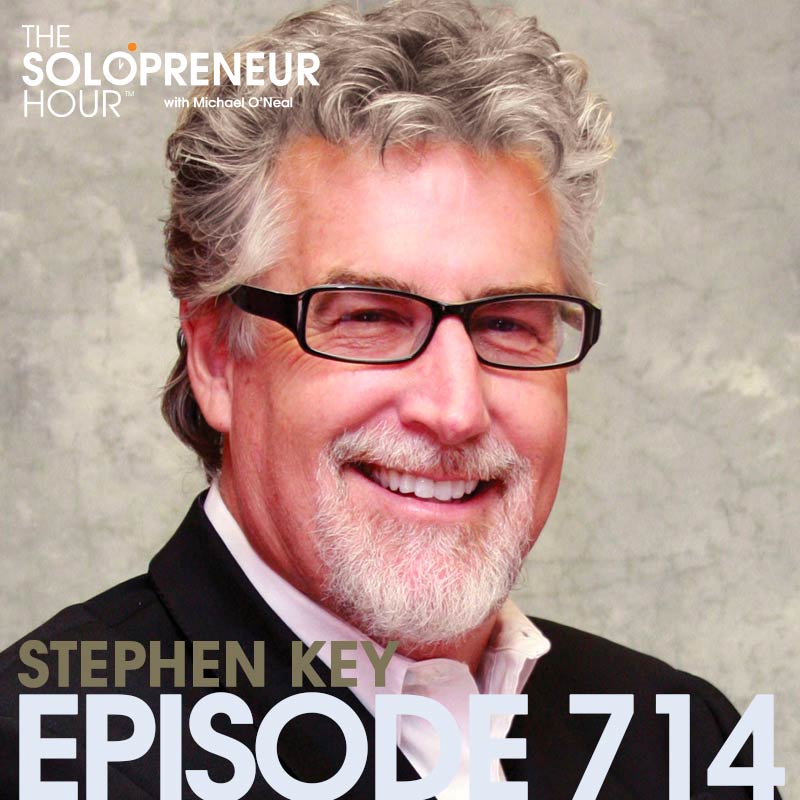 If you’re reading this you’ve probably had the idea for an invention. Have you wondered what’s the best way to take your idea and make it into a viable product? Our returning guest for episode 359, Mr. Stephen Key, can help you.

Stephen is an inventor extraordinaire as well as an author and a speaker. He rejoins The Solopreneur Hour to talk about what he’s been up to since his previous visit a year ago, what he revised in his book One Simple Idea and what he’s learned about the world inventions in his nearly 40 years as a solopreneur.

If you missed Stephen’s previous visit to The Solopreneur Hour find him here on episode 201. We dug into his backstory and how he’s become the inventor and patent expert he is today.

On this episode Stephen and I spend a bit of time talking about one of the three pillars of freedom: time freedom. There’s a lot of discussion about being a solopreneur to create the income you want, not what is dictated to you.

But sometimes we overlook how important and healthy it is for each of us to have time freedom. Whether it’s taking a few weeks to spend with your loved ones for the holidays or going off with your family for 6 months like Stephen has done, that time freedom is truly priceless. And it’s a gift many solopreneurs overlook because they aren’t making six figures yet.

Time freedom and flexibility is something Stephen treasures, as is the knowledge he’s gained in his nearly 40 years as a solopreneur. He’s learned so many lessons like walking away from an idea or a project, and working smarter rather than harder.

We discuss those lessons, as well as what’s changed in the world of ideas and why Stephen revised his book, One Simple Idea. In the past pitching your idea meant creating a one page sell sheet, but today it means making a one minute video.

It also means using crowdfunding and social media to test your idea, get proof of concept and connect with companies who would be willing to license it from you. Crowdfunding is so powerful because people speak with their wallets, before you put your product on the shelves. If your pitch is strong enough and the idea resonates with enough people you can get your idea funded.

And if you have proper funding and a strong online audience companies will take notice; they will want to license your concept. Stephen gives the great example of the Woof Washer 360.

Woof Washer 360 was an idea that all the big companies turned down. The inventor came to Stephen and his team who suggested he take it to social media and crowdfunding. A video was made, garnered 70 million views and a big licensing deal followed!

On this episode Stephen answers the question of what he’d today if he were starting over with nothing, and what he’d have to show for his efforts after a month. It’s an interesting scenario and what he says in response will teach you a lot about the solopreneur hustle. We’ve got all of that and more on episode 359 of The Solopreneur Hour.

QUESTION OF THE DAY: What is the next thing you’re going to do to get your idea made? Let us know in the comments below!